The inaugural Irish Young Philosopher Awards Festival (IYPA) was held on Friday 18 May, 2018 at University College Dublin. Over 450 people attended the festival to view philosophy projects presented by over 180 finalists from primary and secondary schools across Ireland. President Higgins, who was guest of honor at the Festival, spoke about the importance of philosophy for all young people in Ireland. The IYPA initiative was launched by President Michael D. Higgins and Sabina Higgins at Áras an Úachtaráin on Thursday 16th November, 2017.

The idea of the Irish Young Philosopher Awards (IYPA) was created by Dr Danielle Petherbridge (UCD School of Philosophy) and the initiative founded together with Dr Áine Mahon (UCD School of Education), in the College of Social Sciences and Law. The aim behind the IYPA is for primary and secondary school students to explore philosophy through a nationwide award program and festival. The students created complex projects and were judged according to their critical and ethical thinking, creativity, collaboration, philosophical analysis and innovation.

Students submitted philosophy projects in various mediums including posters, films, essays, and podcasts. They also visualized their philosophical thinking in mind-maps or posters. Students from third to sixth class of primary school, plus all students at post-primary level, on the island of Ireland were eligible to participate.

The Grand Prize was awarded by President Higgins to transition-year student Luke Rickard for his project entitled ‘Is it Ethical for Robots to be Caregivers’? Other prizes were awarded to students from around Ireland for projects on questions including: ‘why do we hate?’, the ethics of self-driving cars, gender inequality, perception, identity, the question of free will, what is bullying and should we always follow rules.

Sarah Oliver
Donabate Community College
Project: Do We Have Free Will in a World of Determinism

Centre for Ethics in Public Life Prize in Ethics:

(This category includes topics related to all kinds of ethical issues and virtues, including happiness, trust, love and friendship)

(This category includes topics in philosophy and ethics in relation to AI, robotics, social media, and new technologies)

Aisha Bolaji
Pobalscoil Iosolde
Project: Why do we Hate?

(This category includes issues such as self and society, identity, vulnerability, recognition, gender and identity)

Ailbhe Carre and Siobhan Ryan
Temple Carrig
Project: What Makes You, You?

(This category includes topics such as the nature of existence and reality, humans and nature, perception and time)

Ian MacLeod and Eva O’Leary
Individual Entrant
Project: How Can We Know if God Exists?

(This category includes topics such as existence, freedom, the individual, authenticity, meaning, alienation, nihilism and atheism)

(This category includes topics such as beauty, interpretation and taste in literature, music and art)

The Young Philosopher Awards extends a special thank you to the following people:

The UCD College of Social Sciences and Law

Colleagues in the UCD School of Philosophy

Colleagues in the UCD School of Education

And special thank you to the IYPA judges 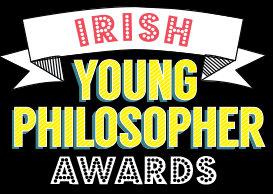